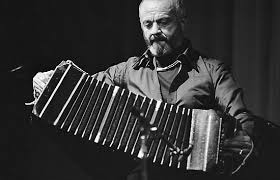 Years ago I lived in Argentina. My apartment in Buenos Aires situated at the legendary “Calle Corrientes” where lot’s of tango history was made. At the time no one understood why I had picked Argentina over Europe to study music, but I did. How could a country with a dance as complicated as the tango not be the perfect place to learn about music, about life, about anything?
At the time I was there, Astor Piazzolla was still alive and I was fortunate enough to hear him in concert and even shake his hand. Tango was starting to become popular in Argentina but was much more so in Europe. I had a lot of friends who were classical dancers at the famous “Teatro Colon” and when they found out I was interested in tango, even had danced it a bit in Europe, they invited me to be their partner when taking tango lessons with the old masters. My favorite music to dance to has always been Piazzolla, although I was told his music wasn’t made for dancing. Here’s a video I came across yesterday that made me nostalgic about those days.

Astor Piazzolla (1921–1992) was an Argentine tango composer and bandoneón player. His oeuvre revolutionized the traditional tango into a new style termed nuevo tango, incorporating elements from jazz and classical music. Piazzolla was born in Mar del Plata, Argentina, to Italian parents and spent most of his childhood with his family in New York City, where he was exposed to both jazz and the music of J. S. Bach at an early age. He returned to Argentina in 1937, where strictly traditional tango still reigned, and played in night clubs with a series of groups including the orchestra of Anibal Troilo, then considered the top bandoneon player and bandleader in Buenos Aires. The pianist Arthur Rubinstein—then living in Buenos Aires—advised him to study with the Argentine composer Alberto Ginastera. At Ginastera’s urging, in 1953 Piazzolla entered his Buenos Aires Symphony in a composition contest, and won a grant from the French government to study in Paris with the legendary French composition teacher Nadia Boulanger. In 1954 he and his first wife left Buenos Aires and their two children behind and travelled to Paris.


…When I met her, I showed her my kilos of symphonies and sonatas. She started to read them and suddenly came out with a horrible sentence: “It’s very well written.” And stopped, with a big period, round like a soccer ball. After a long while, she said: “Here you are like Stravinsky, like Bartók, like Ravel, but you know what happens? I can’t find Piazzolla in this.” And she began to investigate my private life: what I did, what I did and did not play, if I was single, married, or living with someone, she was like an FBI agent! And I was very ashamed to tell her that I was a tango musician. Finally I said, “I play in a night club.” I didn’t want to say cabaret. And she answered, “Night club, mais oui, but that is a cabaret, isn’t it?” “Yes,” I answered, and thought, “I’ll hit this woman in the head with a radio….” It wasn’t easy to lie to her.


The insightful Boulanger turned Piazzolla’s life around in a day, as he related in his own words:
She kept asking: “You say that you are not pianist. What instrument do you play, then?” And I didn’t want to tell her that I was a bandoneon player, because I thought, “Then she will throw me from the fourth floor.” Finally, I confessed and she asked me to play some bars of a tango of my own. She suddenly opened her eyes, took my hand and told me: “You idiot, that’s Piazzolla!” And I took all the music I composed, ten years of my life, and sent it to hell in two seconds.
wikipedia