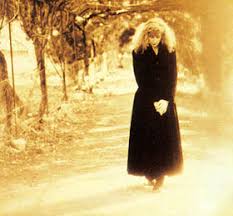 It’s not always easy to stay motivated when you are trying to do all aspects of a production yourself. Often it feels like you are running from one challenge into another. Challenges you don’t feel you can ever surpass. But then, there are people you meet, in person, or otherwise, that lend you a hand so you’ll be brave enough to take the next step. One of these people, to me,  has been Canadian born, Loreena McKennitt. At a moment of desperation, when I got stuck on: “I need to find other musicians, go back to school, get a record label, a manager, an agent, etc”, I came across an interview about her career, and this is the way I remember it:
“… Loreena started out as a street musician and people would come up to her and ask whether she had anything recorded. She didn’t but kept a record of all their names and finally, when she did have a recording, she contacted them. She then distributed her music by dropping it off at local stores. It wasn’t until she was quite successful that a record company got wind of her success and offered her a deal. They paid in advance and Loreena went to work. A short while after she sent them back her newly written songs, they called to let her know how much they liked them but could she please make some changes here and there? Changes, creating too much of a conflict to the artist, then lead Loreena to return the advance and from there on take matters into her own hands…”

Loreena McKennitt
She is self-managed, self-produced, and the head of her own internationally successful record label, Quinlan Road. In a recording career spanning nearly two decades, McKennitt’s “eclectic Celtic” music has won critical acclaim worldwide and gold, platinum and multi-platinum sales awards in fifteen countries across four continents. (Loreena McKennitt Website)
McKennitt’s music has generally been classified as World / Celtic music even though it contains aspects and characteristics of music from around the globe and is sometimes classified as Folk music in record stores. Before McKennitt composes any music, she engages in considerable research on a specific subject, which then forms the general concept of the album. Before creating Elemental and Parallel Dreams, she traveled to Ireland for inspiration from the country’s history, folklore, geography and culture. The album The Mask and Mirror was preceded by research in Spain where she engaged in studying Galicia, a Celtic section of Spain, along with its abundant Arabic roots. The result was an album that included elements of Celtic and Arabic music. According to the jacket notes, her album An Ancient Muse was inspired by travels among and reading about the various cultures along the Silk Road. (Wikipedia)