The sound of the duduk has become known to a large audience through its use in popular film soundtracks. Starting with Peter Gabriel’s score for Martin Scorsese’s The Last Temptation of Christ, the duduk’s archaic and mournful sound has been employed in a variety of genres to depict such
moods. Djivan Gasparyan played the duduk in Gladiator, Syriana, among others.
Born in Solag, Armenia, this artist became famous for his interpretations on the duduk, a double reed woodwind instrument related to the oboe. 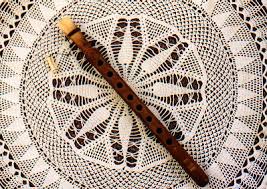 Traditionally known since antiquity, the duduk is a traditional woodwind instrument indigenous to Armenia. Variations of this instrument are popular in the Middle East and Central Asia although not to be confused with the Bulgarian folk instrument of the same name. The duduk is a distant relative of Asian instruments, such as the Chinese Guanzi, the Korean Piri and the Japanese Hichiriki. Unlike other double reed instruments (oboe or shawm), the Duduk has a very large and unflattened reed, and is cylindrical in shape giving it a quality closer to a clarinet or saxophone than a double-reed.